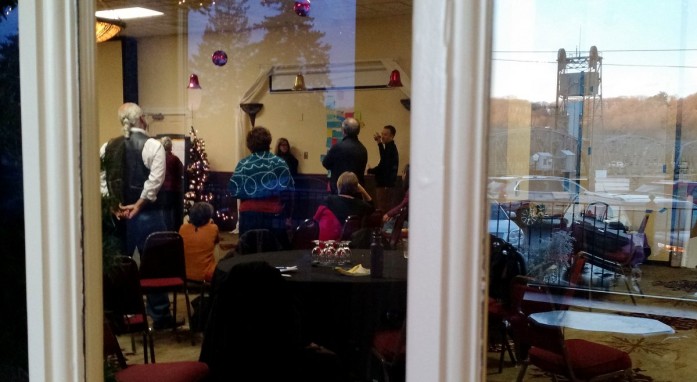 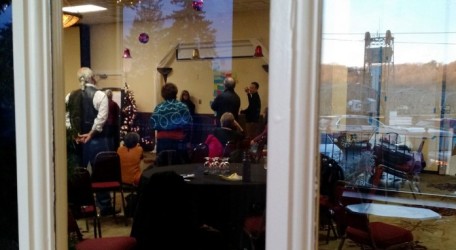 Geology provided the foundation for a day-long discussion about art and nature, visions and values.

Values are not so visible as bluffs.

Words are not so specific as stone.

Written in great detail on the St. Croix River’s rocks is a very old story. The tale begins more than a billion years ago, back in the first chapter of the book, when molten rock spewed from a vast gash where North America tried to tear itself in half. It cooled and became basalt – one of the few substances tough enough to resist eons of water and gravity, the great sculptors of nature.

When an epic flood forced its way through a narrow opening, one of the most scenic gorges in 100 miles was carved out. Its sheer cliffs are crowned by pines, brushed with lichen, sanctified by silence and wonder.

It is inspiring scenery, and a complex narrative. Artists who encounter the St. Croix are drawn to tell this old land’s story, to be part of it.

In the billion years after the basalt was created, there came shallow oceans where sand and minerals settled to the bottom, and there came Ice Ages, when the land was scraped by mile-thick sheets of ice and littered with the stone and sand they pushed around.

At the second Navigate retreat in December, Dr. Jim Almendinger told the geologic story of fire, ice, and water that formed the landscape we live and work in today. Almendinger is a scientist at the St. Croix Watershed Research Station and was enlisted to expand the natural knowledge of the artists and art people who were gathered for another day. They were digging down to find the values, the principles, the important parts of life – the bedrock – that art and nature is built on in the St. Croix Valley. Their task might not have required scientific study like geology, but it proved as elusive as hundreds of millions of years of crashing continents.

They tried to put down in words their unique visions, what they hoped to see in the St. Croix Valley in the years ahead. They asked guests about their connections to area, why they care about it, and what they dream of for its future.

They soaked it all up. People felt saturated with ideas. The conversations were like flood waters that carry nutrients to the soil.  As the afternoon neared conclusion, the group was deep down a discussion of some of the most important and indescribable aspects of life. What do we value, together? How do values connect us to each other and the river and its valley?

It was forty degrees and rainy all day. Hypothermia weather. Fireplace weather. Not necessarily walking weather, but a silent walk after lunch is part of every Navigate day. The facilitators said folks who wanted to walk could walk, but nobody would make you go. Some stayed, some went.

Bedecked in waterproof coats, St. Croix River photographer Ryan Rodgers and I walked a few blocks north to the Brown’s Creek Trail trailhead and back, next to big yachts in drydock covered in tight blue tarps.

Hoods up and shoulders hunched, the rain blowing sideways into our faces, we did not dawdle. We tried to walk without talking but didn’t try hard enough. We nodded and smiled at the others afoot, everyone hurrying after warmth.

Miserable weather, but this group was clearly the people who will go for a walk whatever the conditions. It was like what co-facilitator Shawn McConneloug said later, trying to define what we mean when we say we “value” something. “It is something you will go to the mat for every single time,” she said. We will go for that walk every single time.

Back in the warm and dry Water Street Inn, everyone wrote down what it was they would go for the mat for. Then they were combined with those of a few colleagues. Then we tried to find where the group overlapped. It was not so easy as going for a walk in the rain.

The difficulty began when we tried to merge our individual values – all the texture got rubbed off. While the list up on the wall was complex and intriguing – and values related to nature were the most abundant  – one important priority was absent.

Where was art? It was only on the wall once, at the very bottom. But that’s the thing, art is what is under our feet. It is the bedrock, the bluffs. It is what helps us see the vistas and the visions. We are driven to create by experiencing creation, the grand vistas and the minute wonders. Maybe, but how do we explain what we value about art?

Here was creative tension. This was not supposed to be easy, facilitator Dylan Skybrook observed. The debate over how to articulate art proved that the group was dedicated to getting this right.

When the meeting closed, there was no tidy list of values everyone could agree on. Perhaps art wasn’t up there because it is how we experience values. We often make art because we value nature. What is important inspires creativity.

Maybe art didn’t need to be on the list. Maybe it’s how we see everything else that is important.

From bluffs up and down the river, where the water has worn its way down through rock, a person can get a view of the wide valley, the sky above it. The view is a product of water and rock and time.

The visions crafted earlier were these vistas. Silly stuff like jetpack tours and otter parks spoke to the urge to match wonder with awe. People recited hopes of timelessness, recognition, stewardship, vibrancy. There was respect and responsibility, a dream of a region where people are renewed by the river and return the favor.

This footing was found, even if it was never fully understood. It was like the group hiked high to a bluff somewhere, and they could see a far-off future, but not all the layers of rock and millions of years below our feet.