St. Croix Noir Writing Challenge Winner: …Out Like a Lamb by Cassandra Lynn 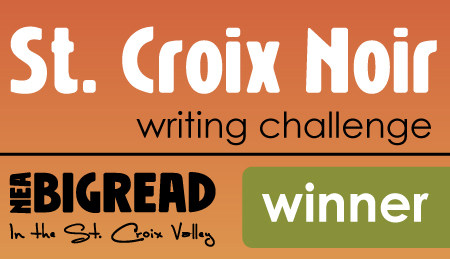 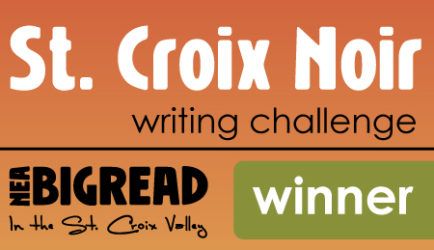 Officer Chuck Russo walked behind the Braider’s barn and approached the sheep’s pen. One rather plump, rather dead sheep was lying on her left side, her head resting in a pool of blood. Chuck used the toe of his black shoe to push back the sheep’s chin, revealing a large gash across her throat.  There was no way this was the work of a wolf. This was a clean, deep cut. Chuck remembered back to Freshman Biology, having to dissect a sheep’s brain—how tiny the organ looked on the lab tray. Sheep were not the brightest animals that Noah had ushered onto the Ark. But stupid or not, this ewe did not deserve such a cruel death. To make matters worse, the two possible witnesses—a pair of frightened sheep, huddled in the corner of the pen—weren’t talking.

Chuck rubbed his face, aware of the stubble on his cheeks and chin. This was the bullshit you dealt with on night shift: murdered farm animals. He sighed as he looked up at the sky. It was a chilly March dawn, not a cloud in the sky. The stars were growing faint as the sun peeked up over the horizon. Hands on his hips, Chuck decided he would take a few photos, then poke around the farm yard before asking Farmer Braider and his wife a few questions.  Chuck gently lifted the sheep a few inches off the ground and peered underneath her body, looking for any clues that might explain this baffling murder. He ran his hand under the left side of the sheep. Brushing off dirt, his hand felt smooth skin. Twenty five years as a cop, and this was a new one: a half-shorn, fully-dead sheep.

Just a few miles from the Braider’s farm was St. Joseph’s Catholic Church. In the rectory, Father Bates sat in front of his roaring fireplace, the scarf he was knitting cascading over his ample belly and into his lap. His head, sporting a full head of gray hair, bobbed up and down as he counted his last row of knits and purls. Bates didn’t know any other priests that knitted, much less any other men. His dear, late mother had taught him to knit when he was a little boy, starting him out with fat needles and chunky yarn.  It was a productive pastime that kept Bates occupied and out of his mother’s hair.  And he truly enjoyed it. But knitting had made him the object of the other schoolboys’ ridicule. One boy in particular had taunted him relentlessly, often taking Bates’ knitting needles out of his schoolbag and snapping them in half. Father Bates was the youngest of seven kids, so money was tight, and knitting needles were hard to come by.  This same boy would come up behind Bates and tug on his handmade scarf, unraveling an hour’s worth of knitting in the process.

Today, Bates loved to knit for his parishioners, surprising them with mittens and baby booties. He had even learned to take wool and spin his own yarn. The Knitting Priest was a bit of a novelty, and every now and then the local paper would do a feature on him. Folks considered it an honor to have something hand-knitted by Father Bates.

Bates preached forgiveness from the pulpit, and in time he had forgiven Jimmy Braider for the years of cruel taunting about his knitting. In fact, the Braiders were devout members of his parish, sitting in the same pew every Sunday. Their 40th wedding anniversary was later this month, and Bates was surprising them with matching scarves.  He even had some special wool he was using, which was soaking in the kitchen. Bates reached down into the sink and swished the clump of wool around. Another rinse, and it’d be clean enough to spin. Releasing the drain, the bloody water slowly circled inside the sink before disappearing.